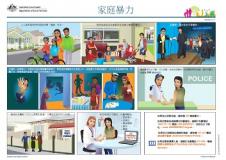 The Australian Government has developed a family safety pack for men and women coming to Australia. It

includes information on Australia’s laws regarding domestic and family violence, sexual assault and forced marriage, and a woman’s right to be safe.