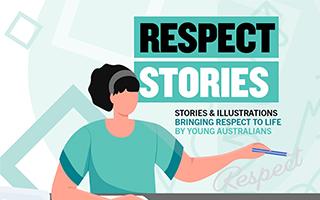 The competition was part of the Australian Government’s Stop it at the Start campaign. It invited young Australians between 10–14 years of age to enter a short story, poem or essay, or an illustration exploring what respect means to them.

“The quality of the Respect Stories entries was exceptional. It was fantastic to see the level of talent amongst young Australians, in both written and visual form,” Ms Dent said.

Jo Stanley was impressed by the variety and depth of the entries. “I have been inspired and deeply moved by the collection of entries. While they are so varied in their telling, they all show a sophisticated understanding of what respect is,” Ms Stanley said.

To see the winning entries and to find out more about Stop it at the Start and talking about respect visit www.respect.gov.au/respectstories